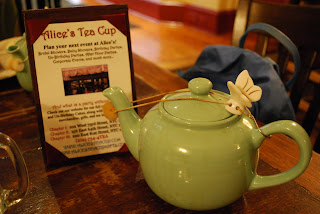 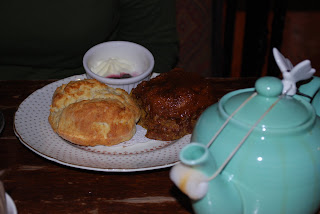 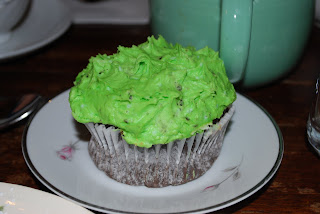 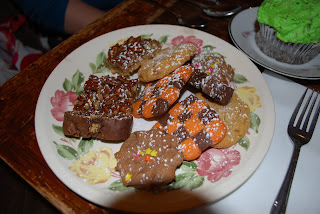 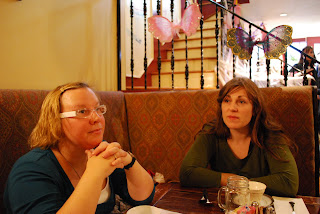 In the afternoon we went to Alice's Tea Cup Chapter II as it was conveniently on the way to Grand Central Station. We weren't exactly planning on eating anything, we just wanted a cup of tea. So we each had a pot of tea: Johan had Russian caravan, Eva had Lavender earl Grey (best by far, one of the best teas I've had and I've ..., yes, exactly). They didn't have the Chai I wanted or the Cinnamon tea, so I had Birthday tea which seemed fitting. As we were still full from lunch Johan had a platter of cookies, Eva an Oreo cupcake (don't know why the frosting was green) and I ordered two scones (cos that was how you ordered them, not because I thought I should have two), one pumpkin (toffee sauce) and one plain buttermilk. Obviously I got clotted (almost) cream and jam. We ate as much as we could, my pumpkin scone was v. good, but we couldn't finish even half of it. I think we did finish the tea.
I don't think we had dinner. Update: We did have dinner. We went back to the hotel and ordered room service: grilled cheese sandwich for me and a club sandwich for Johan. I ate all my chips/fries. With mayo.
I found out about Alice's Tea Cup from the rockstar diaries and I've been dying to go ever since I first read about it. Now I will go back every time I visit NY; it was that good and they had soy milk and the menu went on forever.
Next: Momofuku Ssäm bar