Stuff from my holiday cont. 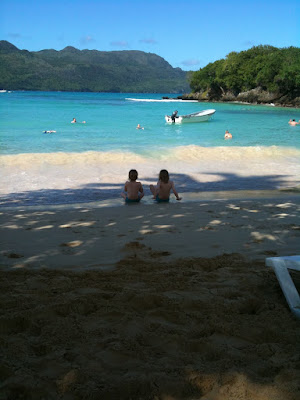 This is Playa Rincón, which is a beach that is only reachable by boat (the most scared I've been since Johan MADE me go in a helicopter on our honeymoon in St Lucia) (so twice the most scared I've been for my life has been in the Caribbean, probably this means I'm meant to get a house there and get over my fears) or jeep (or driver Juan Pablo's car got a clutch problem, I never knew if he planned to drive us down there in his minivan, and frankly I don't wanna know. His van had seat belts for the most important people and I think he was a brilliant man. Although I understood very little of what he said, he spoke only Spanish and once he said fifty, but in Spanish, and that I understood. I was rather busy being absolutely delighted with the scenery, rain forests and me, it's true love, which is very out of character for me, I think. So he dropped us by the boats in Las Galeras, secured a boat for us (which we all, kids included helped push into the ocean, very thrilling) and stayed behind to get the car fixed while we were taken on a nightmarish ride to the most beautiful beach I've ever seen. Also, they had a proper toilet. Alas, no flushing, but having grown up in the country I'm more than able with a bucket of water. I wish I wasn't, but there it is.) We spent 4 blissful hours on this beach, eating newly baked bread, newly killed and grilled lobsters (or langoust, is that even a word?) and had a brilliant Piña Colada made IN a pineapple. We have pictures of this too, but not in my Iphone. And yes, Playa Rincón also has phone reception!
Upplagd av Eva-L kl. 9:20 em

Etiketter: wish I was there

so you dont want to buy a house in Barbados with me then? maybe if i get one you will come and visit occassionally?

Barbados is absolutely perfect. It's the Caribbean in general. I'd come anywhere they have rum punch.

ok will start saving then - will let you know in 20 years or so when i have got enough!