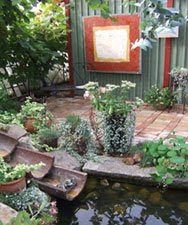 Fatta att jag hittade yogapass i växthuset på Backagården. Det blir nog inte vackrare än så!
Daphne, I found a yoga class at this beautiful conservatory. My first class is on Tuesday.
Bilden har jag lånat på Backagårdens hemsida. Jag tänkte byta ut den mot en egen som visar hela växthuset.
Update: It would have been lovely, I'm sure, but I have such a bad cold that I had to get up at 5 this morning to sit upright on the sofa sipping tea, reading Donald Duck comics, so I didn't make it this time...
Upplagd av Eva-L kl. 1:36 em 5 kommentarer:

This bit is written mainly for Daphne's benefit, she has given birth herself and I know she's not very sqeamish. If someone else wants to read this, but e.g. doesn't like blood (not that Daph likes blood, it's just there's usually some when you give birth and why skip the gory bits?), just stop reading when the baby's out.
Daph, I know how you wanted to be here for Edvin's birthday but instead you'll get the story about his birth. He was born on a Saturday 5 years ago and I don't think I ever told you all the details.

This time (circa 18.45 when I started this post) 5 years ago I'd had two contractions while watching Star Trek TNG and thought it'd be cool to have a baby on the 4 of July, but then again I didn't dare to hope that the baby would come this soon, he wasn't expected until July 16 and false labour can feel like real labour or so I'd heard. I had a few more rather irregular contractions and then they stopped around 21.30. I sat up in front of the computer until about 23.00 and when nothinh happened I decided to go to bed. I promised to tell Johan, who slept in N's room, if anything happened. I read a little and then I turned out the lights. at 23.25 I had a real contraction. They do hurt more. To be continued I hope. Now I have to put the soon to be 5-year-old to bed.
I did wake Johan up after 45 minutes and he started to time the contractions, I still have the paper he wrote it down on:
0.08.30
6,5 min
0.14.55 - 0.15.20 25 s
5 min
and so on. The contractions are between 8 minutes and 2 minutes apart and lasts for between 25 seconds and 70 seconds, and around 0.41.15 we call the maternity ward and they say they're full but we can come in whenever we want to. I start using the TENS unit and Johan's parents arrive to stay with Nils and Johan and I leave for the hospital which is 25 minutes away by car. It's raining, very heavy rain and it's hard to see the road. When we arrive at about 2 in the morning, it has stopped raining and it smells like where in the Caribbean rather than Ystad. On the way I have only two contractions and I start to think they're going to send us home again. I'm so sure of it that we don't take the bag in with us. But the midwife, Birgitta, apparently doesn't think so she gives us a room (the nice one with the double bed, the same room my friend Malin gave birth to her Benjamin in 1 year later). She chats for a bit then leaves us alone and after an hour or so she examines me and says I'm open 5 cm and that we're going to stay. Now the contractions are getting stronger and I stop using the TENS unit start using the laughing gas which is a great relief. Johan goes to get the bag and I am very, very lonely for about 15 minutes. It feels like eternity. He does get back and after a bit I'm standing on the bed on my knees and Birgitta asks if she should break the waters since I'm 8 cm open; having read that this could make the contractions come even closer and stronger (which is kind of the point) I decline put during the next contraction there's a pop and the waters break (which was good beacuse then I could also pee in the bed, I'd read that the baby could get stuck if the bladder was too full, but I was not in any shape to go to a bathroom, yes I could have asked for a bedpan but for some reason this seemed a better idea. All this time I'm waiting for the vomitting to start, with Nils I threw up about 20 times during the push phase (my English does not cover the terms of childbirth). But this never happens, instead I drink coke and water between the contractions and even manage to chat with Johan. I don't speak to the nurse or the midwife because at this stage I don't like them and I don't like people talking, they all have to whisper or be quiet. I'm tired so they make me lay down on the bed and my contractions seem to go away so after the head's crowned and nothing happens Birgitta pushes the alarm button and another midwife comes in and prepares a syringe, I say hello to her and asks what's in the syringe, she tells me it's oxytococic agents and I decide I don't want them as I think they'll stay in my body after the baby's out and prolong the agony. Instead I decide to puch the baby out using willpower, which it turns out works fine. I don't tell anyone my plans as they're all against me and somehow the poor nice midwife with the syringe instead manages to break and cut herself on the glass or the needle or something. At 05.03 I push the baby out and he's very angry and a bit tired so he screams for a bit and then falls asleep. I still have work to do as the placenta has to come out and I say to Birgitta, who I still don't trust, that I won't push again, it'll have to come out on it's own, which it does (to her surprise). AND NO STITCHES! And I can finally relax ( for a bit, in 2 hours I'm standing with the TENS unit having new contractions, we think after-contractions, but they just get worse and it turns out it's a clot of blood that's been trapped in my womb, which could be dangerous, but after it's out I'm OK, if a bit anemic. My favourite midwife of all times, Kristina från Simrishamn, gave me acupuncture for the pain, and it worked, I was so amazed, had I known this I'd have asked to put the needles in my foot when I arrived.

Birgitta was a good midwife, but I stood with my back to her most of the time and didn't see much of her and I kind of got into my head that she was Farmen-Qristina, a notorious reality show contestant, and I didn't like that.

And today is the baby's 5th birthday and he loved your card (and we have to be careful so we don't loose the stars and glitter) and Connor's and I thought Connor's card was the most precious I've seen.
Upplagd av Eva-L kl. 7:01 em 2 kommentarer:

Daphne, so far our vacation is brilliant. It's sunny and warm and we're all sitting inside playing Mario Kart on the Wii. I did oil a deckchair today too. And I had some ice cream. Now I'm blogging waiting for my turn. My parents are arriving tomorrow, they're satying at Johan's parents' house because they are in Korea. Our friends from Stockholm who we're going to Legoland in Denmark with on Monday are also arriving tomorrow so we'll have a full house anyway. Luckily most of them like playing tv games too. Edvin got the card, thanks! I'll give him it tomorrow morning when he gets all his presents.
Upplagd av Eva-L kl. 4:15 em Inga kommentarer: