This weekend has been one of pure indulgence and decadence. Johan and I spent it at the best hotel in the city, having a dreamlike adventure. We started out at the spa where we both had full body massages and facials. I think Johan also used their adventure showers, with cold buckets of water and rainlike shower, but I couldn't work the taps. Then we hung at the bar before going to dinner at the most recent 2 star restaurant in Sthlm, Frantzén/Lindeberg. We decided to have breakfast in our hotel room, I've never done that and it was fabulous, the breakfast was rather plain (but they do have the best house tea at Grand, it's really good). Midday, the child minders brought the kids to the hotel for a brunch. These are the bar pictures. I only took one picture at the spa and I look like I had a stroke, so I'll keep that to myself (although I did send a copy to V. for her to snigger at). 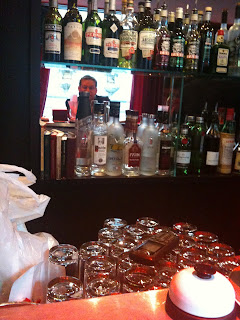 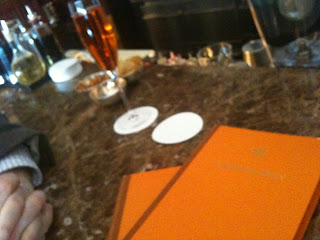 (Bottom picture) Before dinner on Friday we had drinks at the Cadier Bar at Grand Hôtel. I also had a prawn sandwich, as I missed lunch between my hair appointment and my massage appointment. So I ended up having a glass of Chablis with my sandwich and for dessert I had a Rhubarb Martini, which was great. I want to be able to drink gin, it's the best booze, but I don't normally like it, but in this drink it was perfect. Johan had Champagne and Kir, and then he had his usual tropical drink with a straw.
(Top picture) In Old town we went to Le Rouge for one more pre dinner drink. I had another gin drink called Southside, which was a mojito basically. Johan had something red, with tequila, and a straw. We didn't have pre dinner drinks at the restaurant, which turned out to be a clever decision.

Is it just me or did I somehow have a child by Eddie Izzard?! 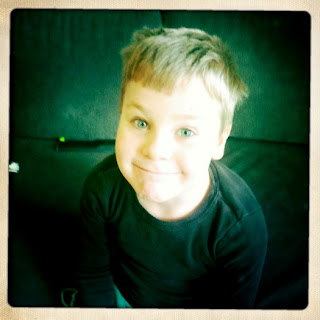 
Daph, on my birthday I got champagne from Johan and clothes from the kids, I cunningly told where to shop and they so love birthdays and pretty things, I got perfect gifts! There are pictures. I will upload them.
Upplagd av Eva-L kl. 2:04 em 1 kommentar: